I really didn’t want to go to a tiger “petting zoo”, but I realized my plan to move to South East Asia was a bust – at least for the moment, and, at that point I had ten more days in Thailand, so I decided to take advantage of every waking moment I had left in South East Asia by  getting as many useful images as I could figure out how to get.

The flip side of it all is that I realized my plan to move overseas was completely doable and I had to return to the U.S., regroup, and go back out and do it right.

So first stop would be Tiger Kingdom.

Animal portraits are a big deal to me, and you can read more about why that is here- www.williammaderas.com/portfolio/animal-portraits/.

So, even though I wouldn’t be photographing tigers in the wild, I wanted to have the opportunity to be around tigers and try developing methods for photographing large predatory cats.

So off to Tiger Kingdom!

I didn’t really see a need to pet the tigers. I just wanted to photograph them.

But all of  the enclosures were made of chain link fence which would have been pretty difficult to get good photos through.

So, in order to get the tiger portraits I had to get into the enclosure with three fully grown tigers. And there were rules, serious rules. I was very reluctant. But once I started hitting the shutter release, I was at peace and in this kind of mental ‘zone’. While I was focusing my efforts on one tiger, I could see the other two tigers running around me or a couple feet in front of me at the edge of my vision. I knew that there was still a possibility that something could go wrong and I could be killed. But I laughed, and thought, “yeah, but who gets to say they died while photographing tigers?” Well… I guess nobody- somebody else would have to be saying it – lol!

I used two camera bodies in the enclosure- my Canon T6i and my full frame Canon 6D.

I swapped lenses back and forth quite a bit since the T6i is a cropped frame.

I did okay with the portrait type shots, although in hindsight I would have tried an aperture setting in the 3.5 range. Normally f/2.8 or larger works pretty good for portraits, but since a tiger’s head is bigger than my entire upper body f/2.8 was pushing the limits for good depth of field.

The action shots… mostly flopped. Why?

Pure speed and power. Not one action shot of these tigers came out.

They can cover 25 feet in a fraction of a second.

Although I was able to get some great portrait shots of the tigers, once they decided to move it was a different story.

Next time I’ll go for shutter speeds of 1/800th of a second or faster. That’s the bottom end shutter speed for catching pictures of birds. Tigers catch birds.

About the only redeeming thing regarding my attempt at action shots of the tigers was that the tigers were in a pool of water ( they love water! ).

The water flying off the tiger’s body during an action shot made for some interesting pics and added a visual aspect to how much dynamic speed and power tigers are capable of. 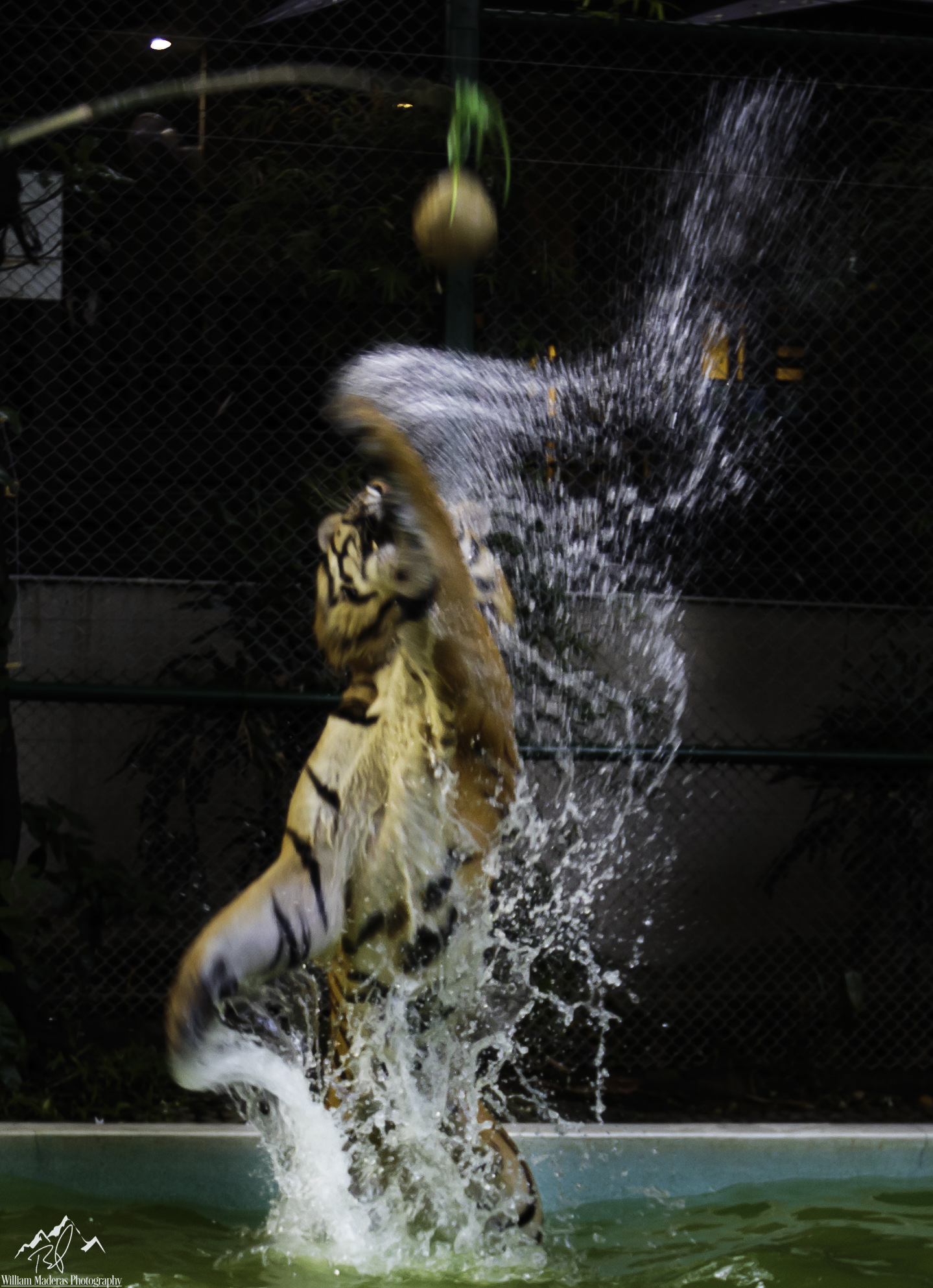 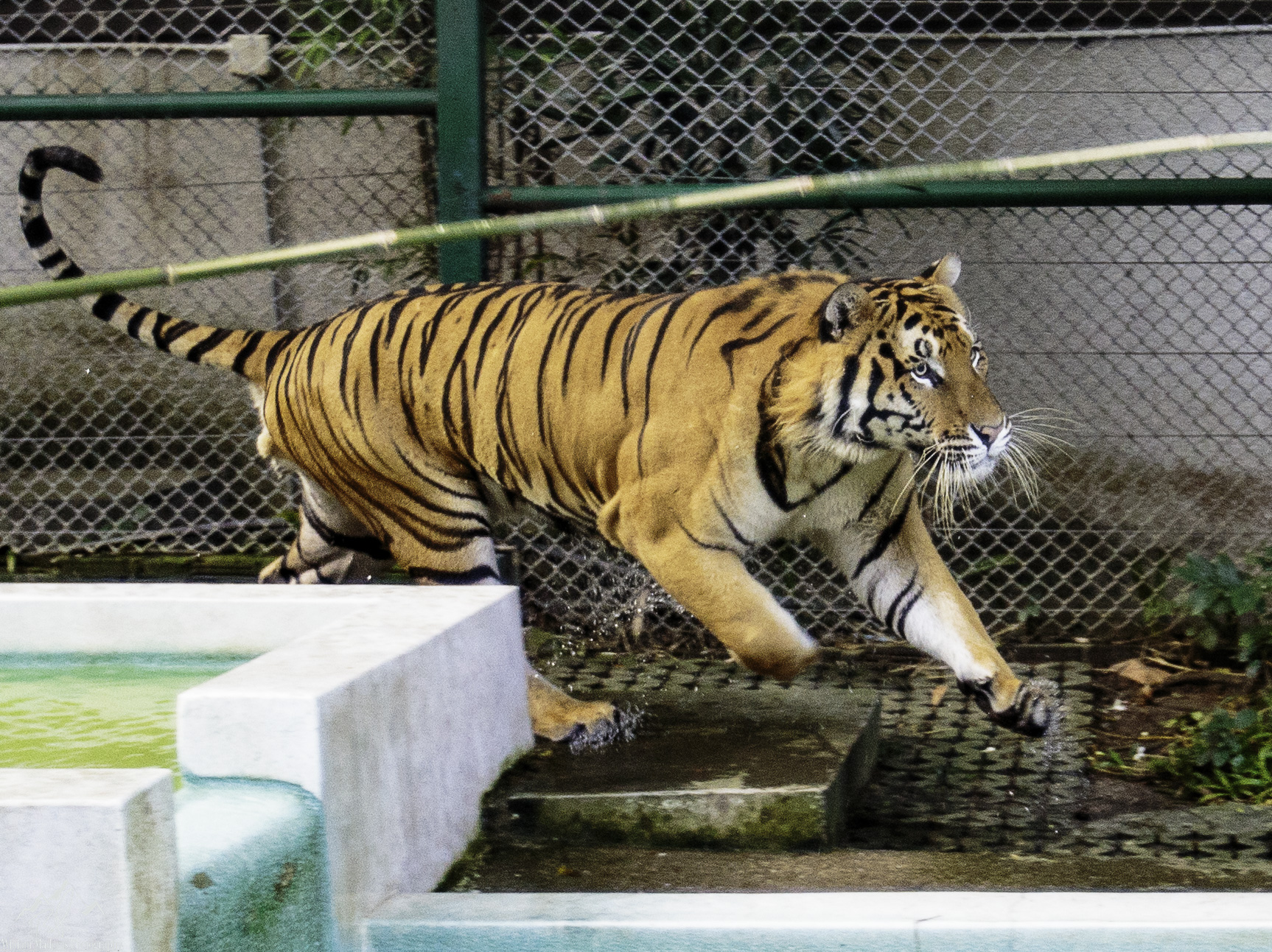 During the course of researching for this article, I discovered just how controversial places like Tiger Kingdom are. I’ve included some links in this article that I hope will shed some light on this.
links here–
This one is an article by a woman who actually volunteered for a time at Tiger Kingdom –
The Truth about Tiger Kingdom by Vicky Taylor

And this one documenting animals bonding with other animals –

My personal opinion sways to the side of the benevolent good intentions of the people who work at and operate Tiger Kingdom.

Ultimately these tigers were raised in captivity and could never be released into their natural habitat for two reasons: 1- they would die or be killed because they weren’t used to the wild, and 2- there is little in the way of natural habitat in Thailand for truly wild tigers. It is estimated that the current wild Indochinese tiger population in Thailand is hovering at around 200. Recent game camera footage suggests the population might be trying to come back.

I look forward to photographing tigers more and also publishing articles regarding bonds between animals and humans, as well as the issues related to “re-wilding” various species into natural habitat areas.